Skip to content
Join one of the largest and most comprehensive theatre programs in Canada.
Request Video Description Transcript

THEATRE STREAMS
IN YEAR 2 TO 4 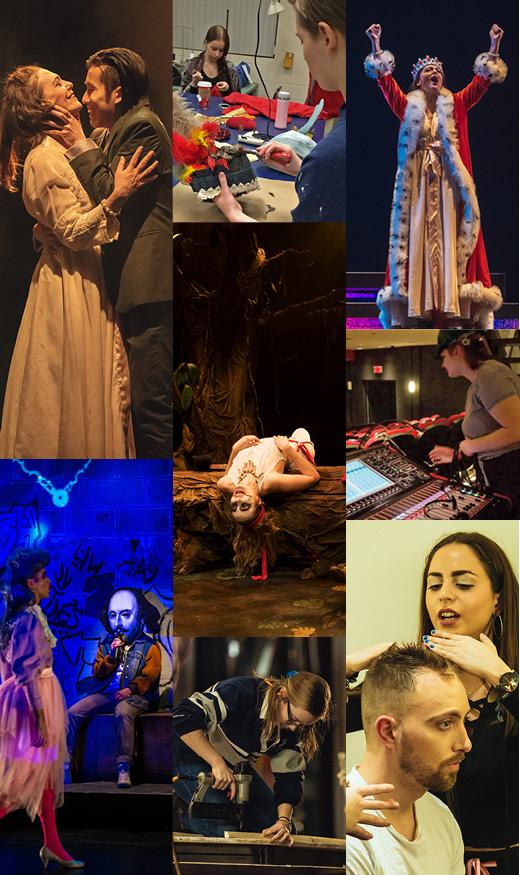 If you’ve dreamed of becoming an actor, a director, a playwright or a production designer, or exploring the world of dramatic literature, history, theory and criticism, the Department of Theatre in York’s School of the Arts, Media, Performance and Design (AMPD) is the place to make it happen. As one of the largest and most comprehensive theatre programs in Canada, we combine in-depth academic studies and rigorous practical training in all aspects of theatre, along with the chance to ignite career paths the world has yet to imagine.

Find your creative expression in the Department of Theatre’s rehearsal studios, lighting lab, drafting and design studios, and carpentry and wardrobe shops. Share your creations using a wide range of specialized, professional facilities for performance. AMPD’s Department of Theatre is the launch pad for a generation of Canadian talent and the place to start making your mark in the world. 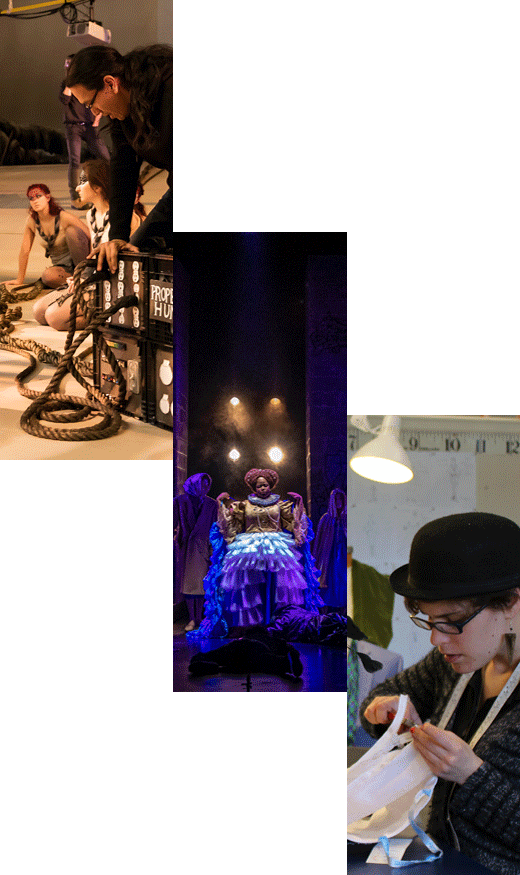 YOUR COMMUNITY
Unleash your creativity as part of a talented community of students, and practicing onstage, backstage and front-of-house professionals. Connect with our global network of alumni, including Hollywood A-lister Rachel McAdams; Artistic Director Weyni Mengesha (Soulpepper Theatre); and David Hein, co-creator of the international, award-winning musical, Come From Away.

YOUR CHOICE
AMPD’s Department of Theatre is the place for interdisciplinary exploration. Hone your craft while pushing the boundaries of performance studies and practice with your fellow artists from across campus — including film, music, dance, digital media, and others — as well as artists in Toronto’s vibrant theatre community.

YOUR CONNECTIONS
Learn from top industry professionals and gain exposure with our partners from across Toronto’s thriving theatre scene and beyond. You can also showcase your creativity in workshop productions, the Department of Theatre’s playGround festival of original student works, and Theatre@York’s annual season of classical and contemporary plays.

Action Plan to enhance Equity, Diversity, Decolonization, and Inclusion within the Department of Theatre

The Drama Club is founded, producing three one-act plays by Sandra Bracken. Without a theatre on campus at the time, the plays were performed at Forest Hill Collegiate to enthusiastic reception.
The theatre program officially opens with performances by the York University Players, a troupe founded by John M. Smith, in Burton Auditorium, which opens that same year.
In the spring, the Senate and Board give approval to establish the Faculty of Fine Arts.
Jules Heller is appointed founding Dean of the Faculty, while Joe Green is appointed Chair and Don Rubin is appointed faculty in the Department of Theatre.
The Department of Theatre enrols its first class.
The Department of Theatre mounted two one-act plays by Tennessee William: 27 Wagons Full of Cotton and This Property Is Condemned, featuring Michael Burgess, Alain Goldfarb, Donna Farron Slivinski, and Charlotte Weisberg.
The first university course on Canadian Theatre is introduced to the Department of Theatre, taught by Mavor Moore. At this time the department offered thirty courses, making it Canada’s most comprehensive theatre program.
The York Theatre Journal publishes its first issue in winter 1971.
The Department of Theatre produces Lysistrata, directed by Robert Benedetti. From ’73-’74, they produce ten productions (two with notable alum Robert Carson). In ’74-’75 they produce twenty-two productions. In ’78-’79 the New Play Festival is founded by Alan Richardson, which runs through the ’80s.
The Theatre Department launches the Canadian Theatre Review.
Drama Studies became Theatre Studies, offering over 60 courses taught by more than 20 full-time faculty. The Foundation Year year was introduced.
An MFA in Theatre is established.
Leon Major directs The Best of York, a performance by students and alumni from all years of the theatre program. Barbara Budd, BFA ’74, is the master of ceremonies.
The student run theatre festival playGround is established.
The Accolade buildings (East and West) are built, greatly expanding the Faculty of Fine Arts, including the Sandra Faire and Ivan Fecan Theatre, carpentry shop, and studios.
An MA and a PhD in Theatre Studies are established.
The Faculty of Fine Arts changes its name to the School of the Arts, Media, Performance & Design (AMPD).

In celebration of the 50th anniversary of the Department of Theatre in 2018, we pointed our spotlight on 50 significant people from the past 50 years. Each week, we asked an alum 4 questions about themselves and their experience at York. Find out what they had to say.

This subscription series allows students to see professional productions downtown. The fee for Surprise! Surprise! is collected with tuition for all first, second and third-year students. Tickets for these shows are available through the Department of Theatre office.

Toronto’s professional theatre community often offers York Theatre students free and discounted tickets for their performances, usually for their previews. Be sure to check your email for notices from HipTix.

Held on specified Wednesdays during the year at 11:30am, Prime Time is a requirement of all first year Theatre majors and is open to the rest of the Department. Directors, actors, designers, theatre makers, and playwrights are among the many interesting guests invited to share their experiences and discuss important issues for theatre artists. Other sessions focus on campus services and support as well as details on the second year process.

Theatre Students Association (TSA): The TSA is a student-run association that encourages and coordinates services and activities to enhance the University experience for students in the Department of Theatre.


Take the next step toward a career in art and design.