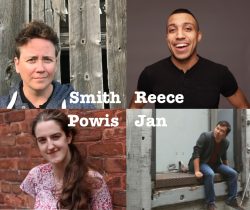 Aaron Jan is a Hamilton-born playwright, director and dramaturg. He has worked as a creator with Factory Theatre, Canadian Stage, Native Earth Performing Arts, Theatre Aquarius, Cahoots, fu-GEN Asian Canadian Theatre, the Stratford Festival and the Next Stage Theatre Festival. Aaron is a member of the critically acclaimed, Silk Bath Collective, whose production of Yellow Rabbit enjoyed a sold-out run as a part of Soulpepper’s 2018/2019 season. Aaron is the 2019 winner of the Ken McDougall directing award and has served as TAC theatre projects juror, a TAC Arts in Parks juror, an RGTC Juror with Cahoots theatre as well as an OAC Chalmers Fellowship Juror.

Lucy Powis graduated from York University’s theatre program with specializations in devised theatre and dramaturgy. While living in Toronto, she worked in Soulpepper Theatre Company’s education department and on productions with Theatre Asylum, Theatre Aquarius, Buddies in Bad Times, Little Black Afro, Then They Fight, SummerWorks Performance Festival, and the Hamilton and Toronto Fringe Festivals. She moved to New York City to pursue her MFA in Dramaturgy at Columbia University and now lives there, working in the literary division at A3 Artists Agency and as a freelance dramaturg and producer. She previously held seasonal positions in the artistic/literary departments at Roundabout Theatre Company, Williamstown Theatre Festival, and Lincoln Center for the Performing Arts. www.lucypowis.com

Autumn Smith is a director, artist educator and consultant. She is the current Artistic and Executive Director of Littlewoodsmith, a theatre company that brings quality theatre performance and education to the Muskoka Region. Autumn holds an MFA from York University in Theatre Direction with an Emphasis on Teaching and is a conservatory trained actor (Oxford School of Drama/UK). Ms. Smith is a member of the Faculty at AMPD (York University) Centennial College and University of Toronto. As a director and educator Ms. Smith led the Dora Award winning company MacKenzieRo for over a 9 year period in addition to working with companies such as: The Shaw Festival, The Tarragon Theatre, Stratford Festival, National Ballet, Theatre Passe Muraille, The Paprika Festival, George Brown Theatre School, Stagedoor Manor in Association with the American Theatre Wing, StageWest Mississauga, Theatre 20, The Druid Theatre/Galway and the Oxford Playhouse/UK. Most recently, Autumn curated and directed Territorial Tales for Canadian Stage, Oh, What A Lovely War! for Hart House Theatre and is set to direct and choreograph Citronella for the Gravenhurst Opera House 2021 season. Autumn also has a musical theatre podcast that she co-hosts called Before the Downbeat.

In a failed attempt to escape Presto, Luke Reece left his hometown of Mississauga under the guise of becoming a Toronto-based artist. He is a theatre producer, playwright, spoken word poet, and arts educator. He is the Producer for Canada’s leading culturally specific theatre company, Obsidian Theatre, and a Member of the Toronto Poetry Project. He continually seeks opportunities to empower and support young-in-craft artists with his collective Little Black Afro Theatre, creating spaces for artists to develop work with and for the communities they come from. Through his work as an artistic leader within the national arts community, he advocates for engaging and nuanced storytelling that challenges Canadian audiences. Luke is one of Toronto’s most decorated slam poets, becoming the Toronto Poetry Slam (TPS) Grand Champion in 2017, winning the Canadian Festival of Spoken Word as the captain of the TPS team and then again in 2018 as the team coach. In 2018 he placed 2nd in Canada individually which earned him a spot representing the country at the 2019 World Cup of Poetry Slam in Paris France where he placed 4th. Most recently Luke has been featured performing for Toronto Raptor and NBA Champion Serge Ibaka on his Instagram Talent Show.