My name is David Rayfield and my multidisciplinary art practice combines theatre production, performance, installation and visual art. I attended the Emily Carr Institute of Art and Design where I received a degree in Intermedia, and subsequently studied for my M.Ed. in Curriculum and Instruction at the University of Victoria, in Victoria, BC.

The performative nature of teaching and art making informs my pedagogical approach. I suggest to my students that challenging their assumptions and core beliefs concerning their abilities means getting in touch with and challenging their inner critic, that an affinity for a particular technique or subject, discovered early in the learning process, provides the clue to what will sustain them in their lives and careers.

As a Contract Faculty member I’ve taught at several institutions including York, where I’ve taught since 2004, initially as a Scenic Painting Instructor in the 1110 labs and later as Course Director for 3142 3.0 Drawing for the Theatre. My ‘teachables’ are Visual Communication, Scenic Painting and Set Design.

I’ve designed sets and costumes for a number of companies. Favourite shows include Tarragon Theatre’s The Baltimore Waltz, Theatre Direct Canada’s A Secret Life and illusionist David Ben’s production of Tricks. As a scenic artist, I’ve painted hard scenery and drops for companies including the Soulpepper Theatre, Theatre Passé Muraille, Tarragon Theatre, YPT, Opera Atelier and the National Ballet of Canada. My involvement in large-scale musicals includes Showboat, Jane Eyre, three touring productions of The Lion King, and the US touring productions of Annie and Sunset Boulevard.

Outside of theatre I’ve had a career as a Decorative Artist and worked for a period as Colour Consultant for Feng Shui Practitioner, Malca Narrol. As an Apprentice Sign Writer, just out of Art School, I had the opportunity to paint signage on Grain Elevators for the Saskatchewan Wheat Pool. I’m good with heights.

As a theatre artist I engage in processes involving finite deadlines. The staged environments I help to create, have a limited life span, that is; a thing of beauty is a joy for five weeks. Stage sets are often discarded into landfill after that period, and too much paint gets into the water table during production, and as this has been an ongoing concern of mine over the years, I’ve always been interested in keeping what remains; for example, off cuts originating from stage construction intrigue me, they represent what I call accidental art.

In the interest of sustainability I let the buckets and trays in my paint shop air dry; a practice that results in hardened artifacts when the paint build up is peeled out of its container. These peelings from paint buckets and pullings from trays have been the models for archival pigment photographic prints I’ve taken over the years. I document their alternative beauty, après art. I participated in Staging Sustainability York U 2011, where I gave a workshop on sustainability in the paint kitchen. 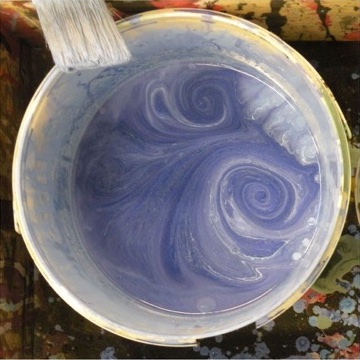 My latest work challenges me to use my by now extensive archive of paint detritus for making small scale three dimensional sculpture, a process that I am only beginning to explore again after having put it on the back burner for several years. In the coming months I plan to study jewelry making so that I can learn to utilize the fine wiring techniques used in that craft to fashion armatures and fastenings upon which to anchor and connect the often delicate dried layers of paint. 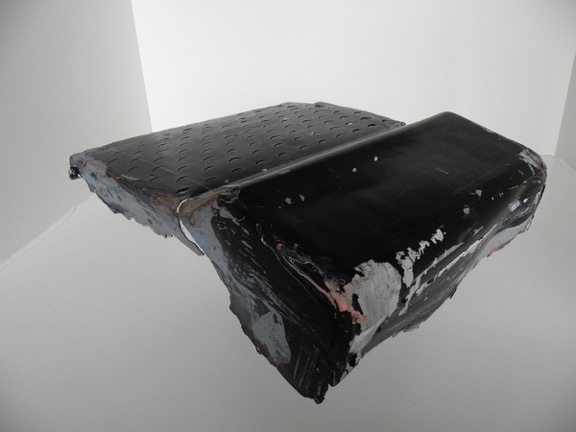 In particular, John Ferguson’s set for Marsha Norman’s ‘night, Mother, looking like it had been ripped from an actual house and planted intact on the Tarragon Theatre main stage. I watched, spellbound, as actors Nancy Beatty and Doris Petrie brought Norman’s compelling drama to life, thinking ‘I want to do that.’

Years later, when I had the pleasure of participating in Soulpepper Theatre’s production of ‘night, Mother, I recalled that moment, thinking with gratitude of the people, shows and serendipity that contributed to and continue to enrich my life and career.

‘It’s Only Too Late If You Don’t Start Now.”

—The title of Barbara Sher’s book on how to create your second life at any age.