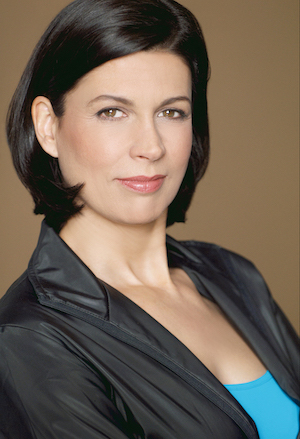 My name is Anita La Selva (MFA Directing 2011) and I am an actor, director, theatre creator and contract faculty member in the Department of Theatre.   I love creation and the process of discovery as one approaches a new work; whether that be on stage, screen or in the studio/classroom. I have worked for many years as an actor in theatre, film and tv and still do while juggling a directing and creating career as well as teaching here at York. I find equal fulfillment and inspiration from all these facets of my life.  I have been a flamenco dancer, an alien on a tv series, a dramaturge and creator of hybrid dance-theatre pieces, an advocate for more inter-cultural work,  a director of a wide array of  theatre pieces and a rescuer of cats. I also coach a lot of actors. When I am asked what I like about teaching, I would have to say it is because I love seeing people ‘get it’ – that is, helping an actor struggle through a character, scene or moment in the creative process that has been eluding them and then watching them finally break through to the other side: that moment of seeing the light go on in someone’s eyes and their feeling of accomplishment makes it all worth it. Recently I have been creating and directing new inter-disciplinary works with actors, dancers, singers, musicians and video artists.

Over the past four years I developed a piece called Stones: an inter-disciplinary theatrical odyssey that examines the spectrum of violence against women by focusing on both the literal and metaphoric act of Stoning. The piece involved hundreds of hours of research, interviews and development in studio with an amazing ensemble of culturally diverse artists form different disciplines. Stones premiered this past June 2018 at the Geary Lane Studios. The piece was co-produced by Aluna Theatre and I am hoping now to tour it or get it into festivals throughout the Americas.

Stones is a response to the violence against women we are seeing around the globe on so many levels. I wanted to create a non-linear dance/theatre piece that offered the audience the opportunity to experience a series of images, songs, dance, scenes and verbatim monologues around the concept of women and stoning/violence that they could witness and then reflect upon. It is an unrelenting 70-minute collage of beauty and brutality living side-by-side.

I can’t really say that there is one person or production. My career has been impacted by so many diverse artists and experiences. I would not be the teacher I am today had it not been for Dennis Krausnick (who recently passed away) of Shakespeare and Company.  Shakespeare and Company is a renown theatre company and actor training facility in Massachusetts that trains some of the best Shakespearean actors in the US.  Dennis was an incredible mentor who trained me as an acting teacher over many years and is the one person I would say who taught me how to teach from compassion – with a strong hand clad in a velvet glove. One of the Productions that has had a lasting impact on my career was a touring production from Ireland called At the Black Pig’s Dyke, by Vincent Woods, that I saw at the World Stage Festival in the mid 1990s.  It is a play about love, murder and folklore and the mysteries of life.  The story is told using the pagan ritual of the Mummer’s play as a metaphor for the religious troubles and tragedies of families in Ireland. What I loved about this production is that it incorporated dance, music and hyper-realistic scenes all woven together so intricately that the audience became almost hypnotized into feeling that they were living through the experience themselves as in a dream.  This is something I strive for as a director. I want to create theatrical experiences for audiences that are not necessarily logical but that can reach out and touch the deep emotional undercurrents of the human psyche.

“Step out of the history that is holding you back. Step into the new story you are willing to create.” – Oprah Winfrey