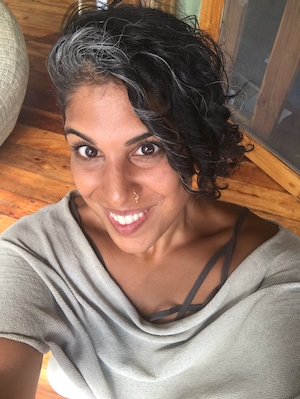 At the root, I’m a spiritual being having a human experience, on the path of being more consistent in not forgetting that true nature while moving through the day to day. In this human experience, however, some identities I roll through the world with are Queer and Gender-Queerish 2nd Generation Immigrant South Asian Woman who is dedicated to dissolving the boundaries between art, traditional medicines, ceremony and spirituality, and social equity with the deep knowing that both art and healing practices are revolutionary and fundamental to our collective liberation.

I worked for about half my life, including several pre-YorkU years, as a theatre artist/creator and actor in Canada, with spurts in the USA, the Netherlands, and India, and now as a Registered Naturotherapy Practitioner offering Ayurvedic Medicine, Energy Healing, Holistic Yoga, and Creative Coaching/Dramaturgy as Co-Founder and Co-director of Soma Integrative Wellness with my brilliant partner and wife MeLisa Moore (www.somaintegrativewellness.com).

Over the years as an artist I’ve had some plays and articles published, loved the creation process of the body being the site of storytelling and unlocking the stories from our very tissue and bones, performed in small weirdo indie warehouse venues to being an actor with the NAC’s Resident Acting Company, facilitated and directed projects in urban and rural India with children with different abilities/disabilities and also former working children and child labourers (the latter thanks to Judith Rudakoff’s Common Plants Project) to co-directing with colleagues like Trey Anthony at the likes of Factory Theatre, choreographed and translated on a couple of projects, had creation/playwright residencies with the likes of Cahoots, Buddies and Canadian Stage, to small town artist hubs in India and Puerto Rico, spoke on a bunch of panels, been a guest artist and lecturer at half a dozen universities/colleges, and somehow my work was annually studied for the past six years in a South Asian Feminist Literature course at York University as well. I feel really complete with my work as an artist, and now while I happily continue occasional work as a voice over artist + vocalist, creativity coach and dramaturge, I focus my energy on supporting people with holistic integrative wellness practices.

I engage with both artistic and health-wellness practices as a dedication to reducing suffering in the world in a form of story, whether utilizing theatre to be a mirror to provoke thought amongst audiences to contemplate the suffering we inflict on each other and the condition of our world, or as integrative wellness practitioner understanding the impact of our social inequities on the health of individuals and our communities, and holding people’s stories they share in sessions with me and reflecting back tools that can guide more healing in the next chapters in their lives and in our collectively created world.

My time at York had many interesting, challenging, and favourite moments. One fav was creating and performing a short solo-piece at the playGround Festival in 2003 or 2004 called World of Bananas. While I loved Creative Ensemble/Devised Theatre training in a collective process, the development and performance of this piece gave space to dive into politicized content of race, gender, colonization, internalized colonization and internalized racism, international development and global economy, while artistically exploring a hybrid of bouffon-performance art in its grand grotesque-ness, using White-Face (turning Black/Brown-Face on its head) as a central image in the piece.

The piece then went on to be accepted to Hysteria Festival at Buddies in Bad Times, and led to the invitation to the Women’s Creators Unit at Buddies soon after I graduated. Several years later in 2011 when I was commissioned by the Canadian Council for International Cooperation to create a touring piece about global gender inequity, World Of Bananas got a total revamp (as I had been wanting to make it more accessible and nuanced) and became Un-Settling (Canadian Theatre Review, January 2016). The Un-Settling version also happens to be the first piece my wife saw me perform in while touring it to Detroit, and she says that’s when she knew we needed to connect and likely work together. So with all the important creative, professional, and personal moments, that came from World of Bananas I can’t help but have an extra special spot for the opportunity the submission committee provided in motivating me to first create and perform it at playGround so many years ago.

Mark Wilson who led up the Creative Ensemble/Devised Theatre program at the time had lots of gems of insight to offer and was a great mentor and guide. One gem that became central to how I created new work was the following that I believe was a paraphrase of Artuad that I’m now paraphrasing here as I remember it, “Open their Mouths with laughter and shove the truth down their throats.” It really did become my motto in many a creation process.

Another moment (or semester really) was in a seminar class: Corinne Rusch Drutz when she began with (again I’m paraphrasing) “You’re going to hate me after this semester, because once you know [all the social inequities infused in art] you can’t unknow.” I never could look at the “semiotics” of another advertisement, movie, or piece of theatre again and combined with the Creative Ensemble/Devised Theatre training continued on to create and direct with a fine tuning of how to expose the dynamics of race, class, and gender that often was overlooked. Corinne was wrong in that, instead of hating this brilliant woman, she had my respect and gratitude for being one of the few professors in the department at the time willing and able to engage deeply in critical discussions of race, class, and gender despite backlash from the department’s Euro/Western-Centric and Male-Dominated culture.

As this series of articles is dedicated to “disruptors” of York Theatre, it seems more than fitting that my honest answer to this question will disrupt the notion of what western theatre training is rooted in (after all my practice is dedicated to dissolving these relatively new colonial boundaries between art, spirituality and ceremony, and social equity.) The aspects of my current work that connect to theatre training, are rooted in the spirit and traditional medicine systems that I practice and offer, which western theatre training “borrowed” (as in culturally appropriated without credit) through the 19th century. (This kind of erasure is not exclusive to theatre by any means, and definitely not just to South Asian/Eastern traditions as it especially happens mostly to Black and Indigenous cultures.) Now I continue to share with others the deeper purpose of these practices that were diluted for the use in studio far beyond the notion performing or a western idea of theatre and performance, and one that allows others to harness an internal power in our journeys of human growth and evolution.