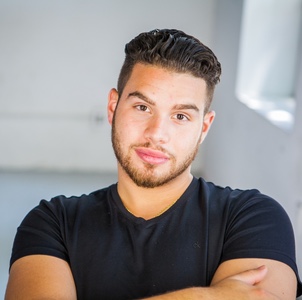 First things first: tell me a bit about yourself. What did you graduate with, what work have you done, what are you passionate about.

I graduated in April, 2017 from York University’s Acting Conservatory with a Bachelor of Fine Arts (BFA) Specialized Honours Degree. Since I have graduated I have been in 2 feature films, 4 TV shows and wrote, directed, produced and starred in my own short film Addiction in which I received 4 awards and 9 nominations in Los Angeles, Toronto, Barcelona and Las Vegas. In total I have received 6 awards and 13 nominations for my work. I have also opened up a media production company, Thirteenth Media. I am also in the process of launching a film festival in Vaughan, ON, as well as a charity for youth struggling with drug and alcohol dependencies. I have just finished a script for my own tv show that I am getting ready to produce and I have also been recording music, having already released several singles. My most popular song, Espresso, has already received radio play. Most importantly, I had a beautiful baby girl named Juliet who is my motivation to do what I do every day!

The most valuable thing I learned at York was to take risks! I learned to take risks in my work, in my auditions, in my life, and it paid off! No risk, no reward.

Most of your work post graduation has been music related. Was this your plan when you started studying at York? If not how did you get into music.

I have always considered myself an artist, not an actor, or film maker or recording artist etc. I don’t think I will ever limit myself to the stage, a screen or even a microphone, I always say for me art is “anything with an audience” and I continue to live by that.

What did you learn in any Theatre courses that you’ve used in a non-theatre situation?

Again, in theatre the fact that they taught us this way of life, this idea that an artist must take care of their tools, which is essentially themselves, I use that in my everyday life.

What has been your most proud moment since graduating from York?

Having my daughter attend my graduation was definitely a big moment for me as a young father. It would also be having my song played on the radio and my family watching me on tv for the first time!

What surprised me is how fast it went by, but also how much I had learned and how prepared I was to go out and present myself as an artist. I took a lot from my professors and they really provided me with the foundation I needed to accomplish what I have in such a short time.

To enjoy life more and to be patient.

What are you working on and when/where can we see it?

I just finished shooting season one of a brand-new show called WAYNE in which I play a starring role as Reggie. It had its world premiere in September at the Tribeca Tv Festival in New York, which I attended. It airs January 2019 on YouTube Premium. I was fortunate enough to work with the writers and producers from Deadpool as well as many other talented, actors, writers and producers.