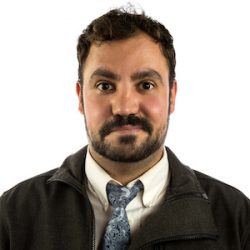 Byron Laviolette (PhD Theatre Studies, 2014) is a Canadian-born director. He has worked as a creative director for the Digi Award winning agency The Mission Business whose clients include NASA, Microsoft, Disney, Starbucks, Autodesk and PWC. He has also worked as an audio director on various projects for organizations like Metrolinx, OntarioLEARN, CBC and Penguin Random House. Theatrically, Byron is the resident director of U.N.I.T. Productions, home of the Morro and Jasp clown duo. With U.N.I.T., he has helped create and stage 12 original works that have won various awards including a Dora Award, a Canadian Comedy Award and over 15 Outstanding mentions in NOW Magazine. Outside of Morro and Jasp, Byron also works with acclaimed puppeteer Adam Francis Proulx, and star drag performer Pearle Harbour.

In general, being allowed to make and remake my own path. I’m not really a rule follower, and York allowed me to discover and dive deep into what I care about. In particular, it’s probably an experience I had during the 2008 strike. During this time, I helped to form a handful of actors and musicians into a sort of anti-protest protest theatre group. Calling ourselves the ‘Sentinel Players’ (after the picket location the fine arts students were assigned to) we travelled from picket to picket for almost two months, sharing stories and rumours and songs that lampooned both the strikers and the administration. This experience taught me the value of the theatre of moment, the power of comedy to both cover up and expose people’s beliefs and biases, and what it looks like to reflect back to an audience the very plight they find themselves in.

Don Rubin, my eventual Ph.D supervisor, used to call himself a heretic. I always really connected with that. As a creator and director, I’ve always loved the outsiders, the strange makers, the rule breakers. Artists, and theatre by extension, is about a point of view, a perspective on the world that isn’t the one typically or usually reinforced. To know that there were others, teachers, leaders, who felt the same way put wind in my sails.

Everyday. I am so thankful to York for both the practical experiences it gave me—like learning how to make theatre on a budget of nothing—as well as the education it offered. York helped me understand theatre as a world practice, not just something that happened behind prosceniums but on the streets, in the alleys, at times of risk and great change in the world. This exposure, gained through the various courses offered and master classes we had access to, helped make me who I am today.